I wrote the following article several years ago for Simply Morgan magazine, for an issue that focused on your favorite attributes of the Morgan breed.  It has since been published in The Lambert News as well.  Hope you enjoy!

While working on an issue of Simply Morgan, I decided I would like to contribute to it.  I love to write.  It’s never hard for me to randomly chatter for a page or so about whatever is going through my head, and since that’s normally horse related, this should be no problem, right?  However after weeks of “waiting for the spirit to move”, I was still stuck.  Then, tonight, as I was riding Blackberry, the horse who I swear is my other half, it hit me.   People always ask me “Why Morgans?”   Maybe this is the answer…..

I grew up and still live in a section of the country that is dominated by Quarter Horses. I participate in events and trail rides where the Quarter Horse still reigns supreme. The guys and gals that are my friends rodeo, work cattle on their farms, and go on pack trips-all with Quarter Horses. More than once I’ve been teased (good-naturedly) and asked why I use my little Morgans when everyone else was mounted on a stout Quarter Horse. I was introduced to Morgans when I was seven years old. I fell in love and every horse I’ve had since then has been a Morgan. It hit me the other day when a friend of mine was trying to explain why he raised foundation Quarter Horses. He said, “I could ask this horse to take a leap up a five foot bank into a mess of brush and briars and he would never hesitate.” That’s the reason I ride a Morgan. No matter what you ask of them they give it their all. I’ve ridden multiple Morgans since the day we brought Blackberry home and no matter what the color, no matter what the breeding, the one thing they’ve all had in common was an abundance of heart. I think that maybe there is something still a little wild in my blood that always wants to see what’s around the next bend in the trail. I need more than a horse-I need a partner. The Morgans that I have ridden are the same way-they’re always looking for that next trail or that next adventure. This is what a Morgan is to me. I can think of multiple examples of the heart and devotion that exists in Morgan horses. There was the time Blackberry nearly ran himself to death because he was determined to be in front during the entire 25 mile trail ride and nothing would do except to gallop. Or the time that I hitched Charli to a log that was much too big for her to pull. She leaned into the collar and never once stopped trying until I said “Whoa”, even though the log never budged an inch. There was Airy who picked her way carefully down a steep slope with the saddle nearly sitting on her neck and never once getting upset or losing her focus until we safely reached the bottom. Morgans try hard for their rider. They give the kind of devotion that one typically only sees in dogs. 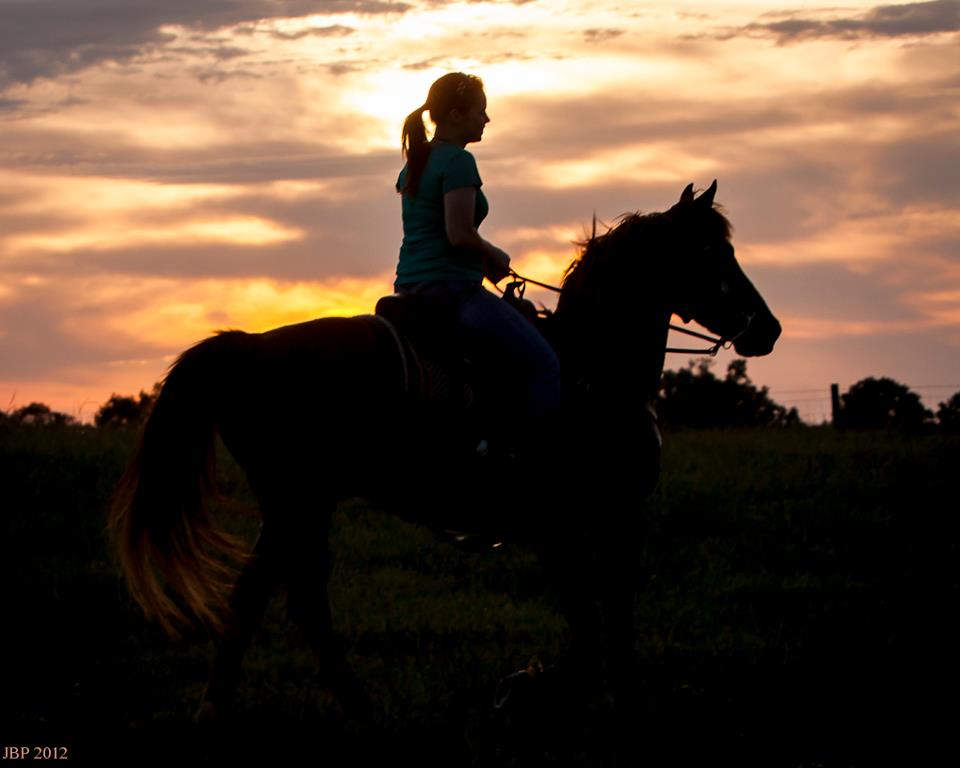 Today there are other breeds that are more popular than Morgans. The Quarter Horse is calm and laid back enough to satisfy even the most beginner of riders. Perhaps it is this attribute that makes them the most popular breed in the world. And nothing against them, they’re wonderful horses and I’ve been involved with breeding, riding, and training lots of them. However, for me there’s just a missing part in other breeds. There’s something special about a Morgan-they give you everything they have. They jump into a job, any job, 115%. This is the reason they skidded logs and drew buggies, pulled stagecoaches, carried mail, and worked cows when this country was young. They had the heart and drive that a young growing country needed. It was on the backs of Morgans thatAmericawas built. There’s not as much need today for a horse to help us survive in our day to day life. However, it makes me proud to know that I have a horse under me that could and would have my back if a bad situation ever arises. Today bad situations tend to be packing you over a jump where you didn’t count the right number of strides or remembering a part of the reining pattern that you forgot when you entered the arena. However, that doesn’t make this characteristic any less important or any less valued. As I rode across the pasture in the twilight with the wind in my hair, it came to me that all of these are the reasons that Morgans are the breed for me. I think Marguerite Henry put it best when she said that Morgans are still around today-over 200 years after their beginnings and will always be around “wherever else a plucky, honest horse is wanted.”

Website design by Cowgirl Media –  Lewiston, ID
We use cookies on our website to give you the most relevant experience by remembering your preferences and repeat visits. By clicking “Accept”, you consent to the use of ALL the cookies.
Cookie settingsACCEPT
Manage consent

This website uses cookies to improve your experience while you navigate through the website. Out of these, the cookies that are categorized as necessary are stored on your browser as they are essential for the working of basic functionalities of the website. We also use third-party cookies that help us analyze and understand how you use this website. These cookies will be stored in your browser only with your consent. You also have the option to opt-out of these cookies. But opting out of some of these cookies may affect your browsing experience.
Necessary Always Enabled

Performance cookies are used to understand and analyze the key performance indexes of the website which helps in delivering a better user experience for the visitors.

Analytical cookies are used to understand how visitors interact with the website. These cookies help provide information on metrics the number of visitors, bounce rate, traffic source, etc.

Advertisement cookies are used to provide visitors with relevant ads and marketing campaigns. These cookies track visitors across websites and collect information to provide customized ads.

Other uncategorized cookies are those that are being analyzed and have not been classified into a category as yet.