My First Morgan: The Story of Blackberry

This article was originally published in The Morgan Horse magazine in April, 2010.

The true Morgan is not excessively crossed to other breeds so as to lose Morgan type and temperament, has a superb nervous system with instantaneous reactions and a high order of activity, always “fired up” and animated. The nervous force is a large part of his endurance, for his will is a function of his nervous disposition. But contrary to other breeds, the true Morgan has the fire in conjunction with great amiability and grace, so that a true example of the breed is as easily handled by a maiden as by a roustabout cavalryman. The old timers called it “kindness at the bit.” ~

When matching horse and rider, they say that green plus green makes black and blue. If anyone told me now that they were buying an unbroken three-year-old gelding for their seven-year-old daughter, I would have thought that they had lost their minds, or perhaps they had taken out a really good life insurance policy on their child and were
just trying to cash it in. However, this is exactly what my parents did for me when I was that age. (Maybe they had taken out that insurance policy…)

The gelding was my first horse—a Morgan named Blackberry Linsley (High Meadows Superb x Show Em Chelsea), so named because of the number of blackberries his breeder Carolyn McMahan picked the year he was born. My family and I had gone to Newnan, Georgia, to watch a CDE, where Blackberry’s brother, Superb Chance, was competing. 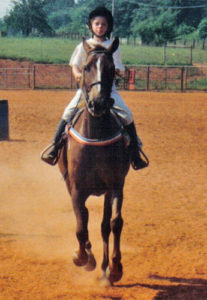 My uncle was particularly impressed, and we ended up going back to the owner’s house to see another gelding she had for sale. My Uncle Sam set me up on Blackberry bareback, shook an overhanging limb in his face, and got no response. Sam looked at my father and said, “If you don’t buy this horse, I’m going to.” So we ended up with an unbroke three-year-old gelding for a seven-year-old child. It was out of character for my family to make any type of decision this fast. However, looking back, I can’t think of any better decision that my family ever made for me.

Blackberry went through 60 days professional training and then was boarded at my riding instructor’s farm whenever he didn’t live at home with us. He was a very responsive, active horse and needed only the slightest touch to go. Needless to say, it was quite sometime before I could ride him fresh. Since then, Blackberry and I have done everything imaginable together. My instructor and I taught him how to barrel race, and we showed in a lot of local saddle club shows both in the running events and in the youth classes. He gained the reputation as the fastest horse in Dacula, Georgia. To this day, I’ve never ridden a faster horse of any breed. It was always fun to race my friends or cousins in the pastures at home. If we began from the same starting point, Blackberry was the fastest off the mark and they didn’t have a prayer of catching him. If I gave them a head start, we would catch them and then blow past like they were standing still. In fact, after one of these races in which my cousin Stuart was riding his new horse, he commented, “Hey, it took you longer to pass me this time! Bo is faster than Maude was!”

My cousins all loved to ride Blackberry because there was absolutely nothing that he wouldn’t do. He is the type of horse that as soon as he figures out his new job or whatever is expected of him, he gives it his all. I know of no other horse with as much try and heart.We competed in endurance rides, did pack trips in the Smoky Mountains (complete with yellow jackets, bears and scary hikers), and competed in local fun shows. 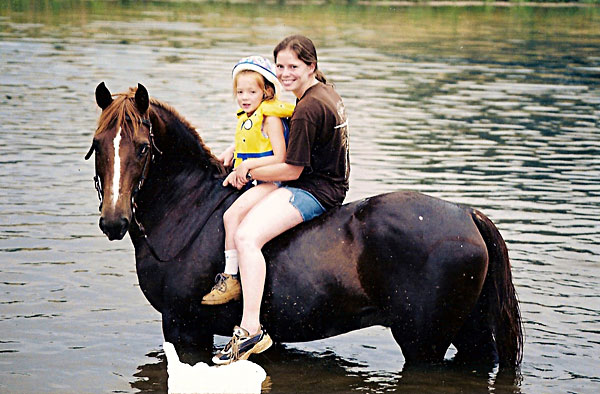 No matter what, Blackberry is excited about what he is doing but never spooky or dangerous. His entire attitude is, “Ok, I’ve figured out what we’re supposed to do in this game and if you just stay up there and hold on, I’ll take care of the hard part.” This is quite impressive when you consider all the shenanigans he has been through. My cousins and I all had horses and did everything that teenagers can think to do on horseback. We rode all night long, crossed the railroad tracks and airport runways that backed up to
our farm, had mud fights and swimming races in the lake, and just spent countless hours having fun and enjoying our horses. I’m not entirely sure how we didn’t kill ourselves. I’ve heard people say that they were glad their kids were interested in horses, since the combination of teenagers and cars can be so dangerous. However, I’m
pretty sure we tempted the fates with all of the things that we tried to do on horses. We tried to emulate John Wayne in nearly every way imaginable, and some of those ways were NOT safe. We played tag and hide and seek and rode on trails that would have given our mothers heart attacks. My horse even held his breath when we were playing horseback hide and seek so I could listen better!

Blackberry always took care of me no matter what harebrained idea I tried. A perfect example of that occurred one afternoon when I was about 16. My sister and her friend Nathan had been gone too long on a trail ride. I was tired and had returned home and unsaddled.When Nathan’s mother came to pick him up and he had not returned, I jumped on Blackberry bareback, double with Nathan’s little brother. In our mission to find Nathan and Ann, we came face to face with a group of guys in a jeep who were
mudding. They decided that it would be much more fun to chase the two people on one horse than to continue mudding. Luckily Blackberry outran them—he was wonderful! Even running as fast as he was, he kept trying to stay underneath the two people on his back, who seemed sure to slide off every time we took a sharp turn.

When Blackberry was 17 years old we started a drill team, Satin and Spurs, at Berry College where I was in school. Like in everything else he loved his new job, and all the girls on the team thought I had the sweetest, fastest horse. They were right! Consistently, when there is a difficult spot to run in a pattern, Blackberry is one of the top choices for it. He can rate speed, turn tightly, and is extremely light on his cues. In 2004, after being together only four months, Satin and Spurs won the Novice and High Point Awards at the Georgia State Drill Team Competition. Satin and Spurs competed again in the 2005 Georgia State Drill Team Competition and won second in the Quad Drill Division (TMH April 2007). Afterwards, Satin and Spurs contracted to perform for 4L Rodeo Company.

Today, Blackberry is 24 years old and although our contract with 4L is up, he is still used for the occasional rodeo, and lots of trail riding. He is still sound and just as full of energy as ever. In fact, I am taking him on a pack trip in the Smoky Mountains this summer. My current job involves lots of demonstrations for local 4-H’ers, and Blackberry is the perfect horse to use as he is always calm and patient with the children. He is a true testament to Morgan versatility and longevity.

Most importantly, Blackberry is my friend. Whenever I am upset or have a bad day, he’s there. I can go out in the pasture, jump up bareback and just get away from everything. He always knows what I need.When I’m feeling restless and need an excuse to run, he gives it to me; and when I need to just sit and think, he can do that too. I don’t know what I would do without him. He is stubborn, headstrong, and always thinks he knows best. But no matter what, he always does the right thing somehow. Even though I wouldn’t recommend buying a young horse for a young rider, in my case it worked out perfectly and I wouldn’t have had it any other way!

Website design by Cowgirl Media –  Lewiston, ID
We use cookies on our website to give you the most relevant experience by remembering your preferences and repeat visits. By clicking “Accept”, you consent to the use of ALL the cookies.
Cookie settingsACCEPT
Manage consent

This website uses cookies to improve your experience while you navigate through the website. Out of these, the cookies that are categorized as necessary are stored on your browser as they are essential for the working of basic functionalities of the website. We also use third-party cookies that help us analyze and understand how you use this website. These cookies will be stored in your browser only with your consent. You also have the option to opt-out of these cookies. But opting out of some of these cookies may affect your browsing experience.
Necessary Always Enabled
Necessary cookies are absolutely essential for the website to function properly. These cookies ensure basic functionalities and security features of the website, anonymously.
Functional
Functional cookies help to perform certain functionalities like sharing the content of the website on social media platforms, collect feedbacks, and other third-party features.
Performance
Performance cookies are used to understand and analyze the key performance indexes of the website which helps in delivering a better user experience for the visitors.
Analytics
Analytical cookies are used to understand how visitors interact with the website. These cookies help provide information on metrics the number of visitors, bounce rate, traffic source, etc.
Advertisement
Advertisement cookies are used to provide visitors with relevant ads and marketing campaigns. These cookies track visitors across websites and collect information to provide customized ads.
Others
Other uncategorized cookies are those that are being analyzed and have not been classified into a category as yet.
SAVE & ACCEPT